When you think of what turned Malistaire into what he is you think of his dead wife. But what about the deeper meaning of him? Well, Malistaire is more than just an enemy, he is an important life lesson. I will be explaining in as much detail as possible why Malistaire himself is tragic, not his story. Shall we begin?

Malistaire, always the enemy, and never the friend. Each step of his story we see is a tragedy, a broken man with a broken life. The first point we see him, the tutorial, you can get a grasp of what kind of man he is. A man who thinks he is too important for you, a man who lets his underlings do the work and scolds them for doing a bad job, typical bad guy stuff. As the story goes he is continued to be portrayed as a big villain, it isn’t until Dragonspyre we get to know him more. We find out how deep his story goes, we learn that he kept his wife alive as a wraith, we learn his home world got destroyed because of lust for power, we learn over all, he is a man stuck in the past, unable to move on. He can’t accept what life gave him and is trying to take control when he can’t. Malistaire in the first arc is portrayed as the bad guy until we end up feeling sorry for him. He is denying the fact that his wife died, and he takes his anger out on everyone around him. The tragedy of first Arc Malistaire is he is unable to move on, he’s living in the past and can’t see the future.

5 stages of grief: Denial and Anger. 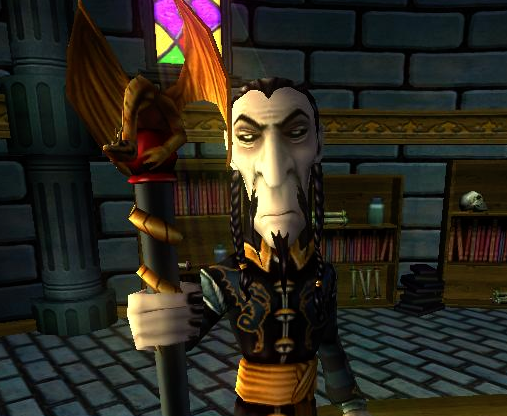 Malistaire wasn’t big this arc, but the time he did appear, on the meteor set to destroy Azteca, he made an impression. All we know is he made a deal with Morganthe to continue living so he can bring his wife back in exchange for teaching her to be better at death magic. Here he experienced the next 2 stages of grief bargaining and depression. He bargained with Morganthe. The meteor symbolized his depression, he was sad enough to try and take a world down with him, this could be anger but in the end of Azteca, we see the mood become dark, we failed, when someone is depressed those around them become sad as well. I suffer from depression, the kind that never goes away. It can feel like the world is ending or crashing down on you sometimes. I don’t think its a coincidence we see Malistaire here. Like Dragonspyre, a world stuck in the past, Azteca symbolizes his current state, depressed.

5 stages of grief: bargaining and depression.

Darkmoor Malistaire is the final stage of our journey with him, he accepts that he has died and can’t bring his beloved back. But we know this is him accepting all this tragedy that he had and has brought because of the world. Darkmoor is full of people who accept their fates. Everyone has accepted a vampire will rule them, some of Shane’s minions accept they can’t beat him so they join him. Darkmoor, although dark, scary and rather gloomy follows the poetic example of worlds you face Malistaire in, a world that mirrors his heart.

Malistaire is tragic not because of how he became evil, but because of how he is. He is a man stuck in the past, taking out his anger on the spiral, yet he is a smart man, one who could have done much good. I don’t think of Malistaire as most people do, I think of him as someone going through the process of grief, someone who lives in this little bubble of insecurity, someone who while just a villain in a video game, speaks to a lot of us. And thats why, he and his story are a tragedy.

Cya in the spiral.

About the Author: Stars

Hey everyone, my name is Stars and I blog and make guides here for the Arcanum's Archives. My main hobbies on Wizard101 are collecting animus with the use of monstrology, fishing for all of the fish in the spiral, and collecting rare treasure cards to add to my collection. I hope you enjoy everything we have to offer here and thanks for visiting one of my posts!